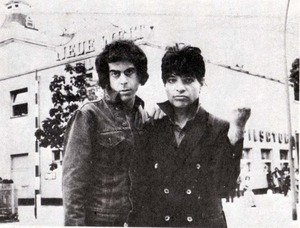 The Clash play at The Apollo, Glasgow, Scotland, UK, Europe, supported by Suicide. During Suicide's set, a fan throws an axe at Alan Vega's head.

Alan Vega (Suicide) : Momeone threw an axe at my head. We were supporting The Clash and I guess we were too punk even for the punk crowd. They hated us. I taunted them with, ‘You fuckers have to live through us to get to the main band.’ That’s when the axe came towards my head, missing me by a whisker. It was surreal, man. I felt like I was in a 3-D John Wayne movie. But that was nothing unusual. Every Suicide show felt like world war three in those days. Every night I thought I was going to get killed. The longer it went on, the more I’d be thinking, ‘Odds are it’s going to be tonight.’
(Source : interview with Jon Wilde, The Guardian, Aug 2008)
Tweet this Fact