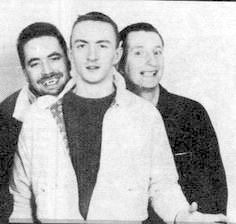 The Redskins release a new single, Kick Over The Statues, on Abstract Dance Records in the UK. All proceeds from the single will go to the Anti-Apartheid Cause. The Redskins' regular record label, London Records, had chosen not to release it.

Chris Dean (The Redskins) : After putting back the release of the album until next year, London have sat on the single, finding different reasons for not putting it out ... so we took the tapes. Our attitude is that it had to come out - end of story. Whether or not its the right time of year for the music business is totally bloody irrelevant. Because of what's happening in South Africa, it needs to be out now.
(Source : Sounds news item, 16 Nov, 1985)

Roger Ames (MD, London Records) : It was simply a disagreement about the aesthetic and commercial merit of a certain record that was misconstrued by The Redskins and blown up out of all proportion.
(Source : Sounds news item, 16 Nov, 1985)
Tweet this Fact