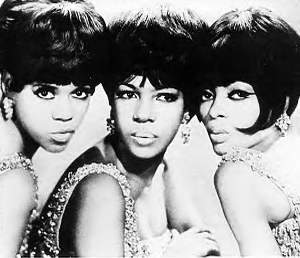 The Supremes are signed to Berry Gordy Enterprises and Tamla Records in Detroit, Michigan, USA.

Mary Wilson [The Supremes] : Diane (Diana Ross) knew Smokey Robinson, and he got us an audition. We wore pleated skirts and tennis shoes and Berry Gordy told us to come back when we finished high school. We used to go to the Grand Boulevard office every day and pretty soon started doing back-up vocals and handclaps for Marvin Gaye and Mary Wells.

In January 1961, Mr Gordy signed us and told us to change our name. Florence came up with The Supremes. We had about ten local hits with Smokey and got nicknamed the no-hit Supremes. It wasn't until Berry Gordy put us with the songwriting team of Holland, Dozier and Holland that it started happening in 1964.

Brian Holland (Holland, Dozier and Holland) : Berry Gordy always said, "listen to the radio." It's important to get a pulse on what's going on out there. Listen to different sounds for production ideas. Be inspired by great songs and great production. Source : http://www.songwriteruniverse.com/hdh.htm

Diana Ross : Berry taught me a lot. It was like leaving home. It wasn't like we were these little puppets and he told us what to do. We were young, but the style was created by us, not by Berry Gordy, not by the company.
(Source : not known)
Tweet this Fact