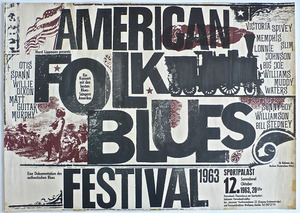 THERE WAS a period when blues enthusiasts were doubtful whether the American Folk Blues Festival would be coming to England at all this year and I understand that the National Jazz Federation had only three weeks in which to find a suitable hall and make the necessary arrangements. It was certainly worth it and they are to be congratulated on the excellent organisation of the Festival at such short notice. It would have been a serious loss to British jazz audiences if we had not had the opportunity of seeing and hearing the Festival as I think supporters of all types of jazz would agree. The cross-section of the blues was quite remarkable and we cannot close our eyes to the fact that we may never hear some of these singers again. It is the policy of Horst Lippmann and the arrangers to bring over to Europe each year a selection of blues artists which will change from year to year
Tweet this Fact