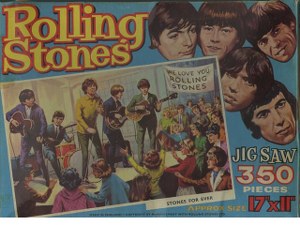 The Rolling Stones are punished for turning up late to two BBC radio shows, Top Gear and Saturday Club. The Corporation bans them from live shows. "If the BBC are upset," fumes rebel youth Mick Jagger, "we're sorry. We don't want anyone to be upset with us. If necessary, we will apologise."

Bill Wyman [bassist, Rolling Stones] : He [manager Eric Easton] signed contracts when we were on tour in America, said we would appear, and he didn't check with us. And we tried to be very tough with our management and have the final say and not to be run by somebody, you know, as lot of bands were. We did try to keep that independence and it was a bit of a breakdown between us and Eric Easton at the time - in fact he was being superseded at the time - and he persisted in signing these contracts and booking us on those gigs without telling us. And then we got back to England about a week before, and he's saying, 'You're doin' it and that's that.' And we were saying, 'No, we don't. We haven't agreed to do and we haven't signed anything. It's your problem.' You know? And that's what it was, really. But of course it always comes back to the performer, so we suffered.