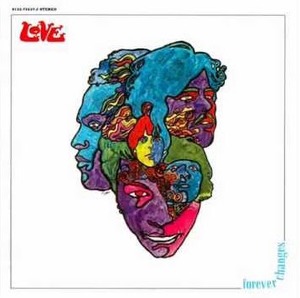 Bruce Botnick (engineer) : It (recording of the album) stopped twice, and started three times. First time, I was going to produce it alone with Neil Young, and about two days into it he said that he couldn't really do it because of his commitments to The Buffalo Springfield.

Then I was going to produce it alone, which I did, even though the credit says Arthur Lee and Bruce Botnick. That's because we'd gotten into a disagreement, and my pride outweighed my sanity, and I called Jac and insisted that my name not even be on the album. Later on I regretted what I did. So then I got the guys together and Arthur had all of these great songs, and they were playing really badly. Extremely badly; there was nothing there.

I said to Arthur, "This isn't going to work; we're not going to get an album."

Then I called Jac and told him that I'd like to do a couple of cuts with studio musicians, and I called in the Wrecking Crew, Hal Blaine and those people. Arthur played acoustic guitar and we did a couple of songs, which wound up on the album, you can really hear the difference.

The Daily Planet was one of them. I can't remember the other one at the moment. They're really obvious, but they're really cool nevertheless, 'cause they're Arthur. The band sat in the control room crying uncontrollably; I mean, it was unbelievable. They all came to me after and said, "We'd like another chance, we'll get ourselves together," and I said, "OK."

We went over to United Recorders, which was at that time Western Recorders Studio One, because I couldn't get into Sunset Sound for some reason, and we recorded the basic tracks with all of them, and then we came back to Sunset Sound and recorded all the brass and strings, Arthur's vocals, Bryan's vocals.
(Source : interview by Matthew Greenwald in The Tracking Angle, Issue 14, 1997)

Frequently hailed as a classic of psychedelia, Love’s third album Forever Changes is actually a much rarer artefact – an album that exists in its own category.

As the first rock band signed to the previously folk-dominated Elektra Records, the Los Angeles based Love had a lot to prove. Initially touted as the new Byrds, their eponymous 1966 debut album certainly ploughed a similar folk-rock groove, but by the time of its successor, Da Capo, they were clearly heading in another, more idiosyncratic, direction.

At the heart of the band was Arthur Lee, whom Elektra Records’ president, Jac Holzman, has called, "one of the few geniuses I have met.” Born in Memphis, Lee had grown up with eclectic musical tastes that embraced soul, r’n’b, folk-rock and MOR. He seemed equally at home rocking out with his friend Jimi Hendrix or chilling out to the smooth sounds of Nat ‘King’ Cole, and elements of both are clearly audible in Forever Changes.

Recording began at Sunset Sound, Los Angeles, in June of 1967 but, by that point, the band was falling apart. There had been personnel changes, much internal bickering and escalating hard-drug problems. Things were so bad that Elektra Records’ producer Bruce Botnick, who was to co-produced the album with Neil Young, decided to dispense with the services of all the band members except Lee, and brought in LA’s crack session-player team, The Wrecking Crew, to create the instrumental backings.

The first two tracks, The Daily Planet and Andmoreagain, were recorded with Lee arranging, playing and singing, while the other band members merely watched from the sidelines. Horrified by the ease with which they had been replaced, they demanded their old jobs back. “The band was so shocked,” remembers Botnick, “that it caused them to forget about their problems and become a band again.”

When the sessions resumed on August 11, Lee had usurped Young, and the rest of the band had replaced the Wrecking Crew.

Precisely what happened next remains a matter of whose version you’d most like to believe. Virtually all of the participants have offered dramatically different scenarios and, given how stoned they apparently were during the sessions, their recollections can hardly be relied upon.

What is irrefutable is that Lee wrote most of the songs, although the band’s other guitarist/vocalist Bryan MacLean composed the best-remembered track, Alone Again Or, plus the haunting Old Man. The other major contributor to the album’s unique sonic palette was David Angel, an orchestral arranger who had previously worked with Andy Williams and Herb Alpert’s Tijuana Brass.

Angel’s input is evident from the opening track, MacLean’s lovely Alone Again Or, where shimmering strings and mariachi horns, courtesy of members of the Los Angeles Philharmonic Orchestra, brilliantly intensify the drama of the band’s delicately finger-picked acoustic guitar patterns.

In a way, Alone Again Or represents the whole album in microcosm.

The musical elements – acoustic guitars, strings, horns, understated bass and drums – are all here. Having been blown away by the guitar pyrotechnics of his now internationally acclaimed old friend Jimi Hendrix, Lee had astutely decided there was no point in trying to compete. Instead, Forever Changes would be largely acoustic, and focussed on well-constructed songs rather than on instrumental virtuosity.

Lyrically too, the mood of other-worldly strangeness in MacLean’s song sets listeners up for Lee’s similar – if noticeably weirder - approach throughout the subsequent tracks.

Even Lee’s obsessive need to control every aspect of Forever Changes is demonstrated in Alone Again Or because, lacking confidence in MacLean’s singing, Lee mixed down the composer’s lead vocal, burying it under his own harmony part.

Lee was, of course, the main factor that ensured Forever Changes would stand apart from the general run of West Coast psychedelia at the time. Unlike the rainbow-eyed battalions of hippie bands promoting love, peace and brotherhood, Lee saw the world as a dark, dangerous place on the brink of self-destruction. “When I did that album,” he has said, “I thought I was going to die.”

At just 22 years old he was convinced that he would not live beyond 26, and the album brims over with dire portents of the apocalypse he believed was imminent. The Daily Planet, for example, is a damning indictment of the tedium of modern life generally and, very specifically, of the part played by toy guns in conditioning children for war.

The title of the song The Red Telephone refers to the hot line linking The White House to The Kremlin, to be used only on the brink of nuclear attack, and in A House Is Not A Motel he asserts, “By the time that I’m through singing, The bells from the school of war will be ringing.”

Given all of this, it should be an intensely depressing album, but the sheer beauty of the music conspires, at first, to sugar the bitter pill of Lee’s lyrics. As a result, when the lyrics do finally seep through after repeated listens, their impact is significantly greater.

The innovations in Forever Changes are too many to document here, but a few examples will serve to give a flavour. The Good Humor Man He Sees Everything Like This employs cut-up tapes of horn parts to simulate the sound of a needle jumping in a vinyl groove. Maybe The People Would Be The Times Or Between Clark And Hilldale features an ingenious lyric device of leaving the final word out of two verses, then using it as the first word of the next. The otherwise tightly constructed Live And Let Live ends with a guitar solo that deliberately falls apart.

When recording ended in September, Love had fashioned an album as innovative as Sgt Pepper or Are You Experienced, but with an entirely different mood and musical landscape. So different, indeed, that the world wasn’t quite ready for it.

On release, Forever Changes staggered to No154 on Billboard album chart before disappearing back below the horizon. Only the passage of time and the persistence of critical acclaim has elevated it to the status of an all-time classic - but it still hasn’t gone gold.

(Source : by Johnny Black, first appeared in the book Albums by Backbeat Books, 2007)