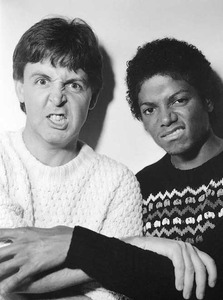 Michael Jackson pays $47m to acquire the ATV Music catalogue, which includes most of the songs written by John Lennon and Paul McCartney of The Beatles. The first action taken after the purchase is to make all employees of the company redundant.

During a 1981 dinner in Paul McCartney’s home, The Beatle had explained the value of song copyrights to Michael Jackson, and sparked a desire in The King Of Pop to one day own The Beatles’ song catalogue. That day came in 1985 after Jackson learned that ATV Music, the company which owned 250 early Beatles’ copyrights, was up for sale. After months of negotiation with the Australian billionaire Robert Holmes A Court who owned ATV Music, Jackson’s £47m bid was accepted, making the 80s most successful pop artist owner of the lucrative catalogue of the 60s most successful band. However, while Jackson saw it simply as a business transaction, McCartney considered it a "dodgy" deal which undermined their friendship. In a 2009 tv interview, McCartney revealed, "I did talk to him about it. But he kind of blanked me on it. He kept saying, 'That’s just business Paul.' … And I thought, mmm.... So we kind of drifted apart. It was no big bust up. We kind of drifted apart after that." When Jackson faced financial problems a decade after the deal, he sold 50 percent of ATV to Sony for $95m, creating the music publishing company Sony/ATV. Ultimately though, in 2017, McCartney secured an undisclosed settlement with Sony/ATV under a law which allows songwriters to reclaim copyrights 35 years after having given them away.
Johnny Black