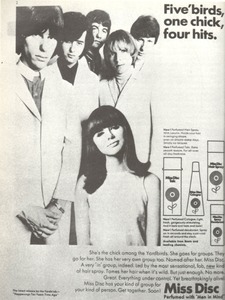 The Yardbirds (with Jeff Beck now as their guitarist), The Moody Blues, The Mark Leeman Five, Jimmy James And The Vagabonds and others play at the Sounds Of 65 concert in Fairfield Hall, Croydon, UK, a benefit for pirate radio station Radio Caroline.

Jim McCarty (Yardbirds) : There was a group of girls standing on a wall looking down at us loading our gear. One of them was shouting, 'Jeff! Jeff!' – a cry that became familiar to us over the next eighteen months. Anyway, after saying something to her, he turned to us and said, 'That's my missus.' He never brought her to gigs … as soon as he realised the sort of girls we were attracting, he went on the rampage.

George Harrison [The Beatles] : I think if the BBC can be legal on land, then so can everybody else. Y'know, that's how it should be, all - they either have nobody doing it or they have everybody doing it, don't they, eh? Not just the fave-rave little BBC government sponsored, or whatever it is. All one-sided, y’know!

Jeff Beck : Mentally, there was some subliminal connection between all of us (English rock guitarists), wondering what one another were doing, but physically, no, we were not around each other very often at all. Eric lived not very far away from me at the time, and Jimmy lived not very far away, either, but I hardly ever saw Jimmy until I got him into the Yardbirds as the bass player. England being so small, many people think we all lived in Buckingham Palace together, but in fact we saw each other very rarely.

I joined the Yardbirds in February of ’65, and I’d never saw sight or sound of Eric with them before that. My only connection to him was hearing the rest of the band talking about him, that he used to do this, that and the other. I got pretty pissed off with it, like, “Shut up, I’m here now!” For the first couple of weeks, all I heard was, “Oh, Eric, the girls love him in this place,” and I’d say, “All right, enough of that!”

I didn’t see him until about a year later, because we were off to America. Right when I joined the Yardbirds, they had a massive hit with “For Your Love,” which Eric detested and was the reason he left the band. So we were off pummeling around the States on the three-week promo tour. When we went back [to England], by pure chance I bumped into him in a club and I thought we were actually going to get into a fight! But when he saw me, he went, “Hello, man!” and he gave me a big hug, and that was the end of that.
(Source : interview in Guitar World, 2014)
Tweet this Fact