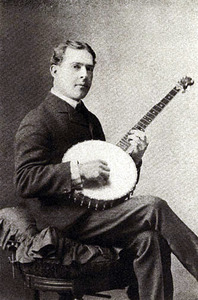 Vess L. Osman (letter written while on Isle Of Wight) : This is the place where they hold the great regatta. The King is here all week, and last night I played for him at the Royal Squadron — the most exclusive club in the world. The Prince of Wales was also there, besides all the royalty you ever read about, and you can safely say that never was a banjo played for so many of the nobility at one time. I am not the only American, but I am the only banjoist who ever played at the Royal Squadron.

I used your Whyte Ladye banjo. There is a yacht lying outside in the bay called Whyte Ladye. People looked at the banjo and expressed their delight at its beauty, and when they saw the name they wanted to know if there was any connection between the two. [A note after the article confirmed that the banjo was indeed named after that particular yacht.]

Have had a wonderful trip, and have done my best to make the banjo popular. Am coming home next week to get ready for the season, etc. Getting before the King is worth more to the young American banjoist than all the classical music could ever do. I have made a reputation I am proud of — one which will always live among banjoists — and I made it on popular music.
(Source : http://ragpiano.com/perform/vossman.shtml)
Tweet this Fact