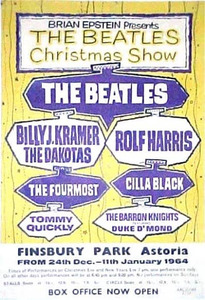 The Beatles' Christmas Show is presented during a season at The Astoria, Finsbury Park, London, England, UK, Europe, featuring The Beatles Cilla Black, Rolf Harris, Billy J. Kramer And The Dakotas, The Barron Knights, The Fourmost and Tommy Quickly.

George Harrison : We didn’t like doing pantomime, so we did our own show, more or less like a pop show, but we kept appearing every few minutes dressed up … for a laugh.

Tony Barrow (The Beatles publicist) : The Beatles were never much for rehearsing. That never really mattered as far as songs were concerned, but the fact that they were so bad at doing the sketches was an added extra for the Christmas shows – it was organised chaos but it was very funny chaos.
(Source : https://flashbak.com/the-beatles-christmas-concerts-24-december-1963-to-11-january-1964-63369/)
Tweet this Fact