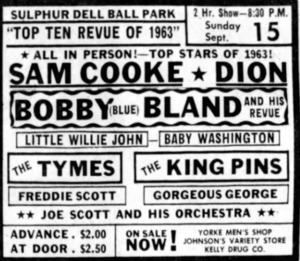 Dion : That was some tour. Memphis - you know, we were travelling around through Virginia, down through the South, Mid-Atlantic. lt was kind of tense at times. Not Sam Cooke. Sam Cooke was a real gentleman. Him and I talked a lot. But I'd say some of the other guys, some of the musicians - Bobby 'Blue' Bland's players, some of the roadies or whatever they were. The gophers, guys who were hanging on to Bobby 'Blue' Bland, they got attitudes. So that was a little difficult. Sam was kind of a champion for that, cooling everybody out. I miss him. He was quite unique. He was full of music.
(Source : not known)