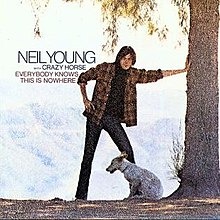 Neil Young releases his second solo project, Everybody Knows This Is Nowhere, on Reprise Records in the USA. This is the first of his many albums on which Young collaborates with Crazy Horse.

Neil Young : Everybody Knows This Is Nowhere marked a change for me at the time. I wanted to play and jam, do more of what I loved with Buffalo Springfield and The Squires. I wrote the seven songs and went into the studio with David Briggs producing. It was our second record.

I sure remember those sessions well. I still see Ralphie glance at me during playing the recording of ‘Down by the River’ or maybe ‘Running Dry’, with a look of pure joy on his face. This was the beginning of something that really had it. All the songs were written fairly quickly and before long they were all recorded. ‘Everybody Knows’ was the oldest song. I had tried it previously for my first album, the one mentioned above. All the others were brand new. I wrote 3 of them while I was sick, in one delirious day in bed. Down By the River, Cowgirl in the Sand, and ‘Cinnamon Girl’. There were only seven songs because there was limit to how much a vinyl record could hold and still sound great. We had reached the limit. We would not edit the instrumentals to be shorter. We would not change anything. We were done.

So here it is 50 years down the road. I can still see David mixing this record at Wally Heider Recording on Selma avenue in Hollywood. He was a genius. J. Hanlon and I are still marveling at his touch, his methods and his vibe. “Be great or be gone”. Those were his words.
(Source : https://neilyoungarchives.com/#/news/5/article?id=Album-Of-The-Week-Everybody-Knows-This-Is-Nowhere)