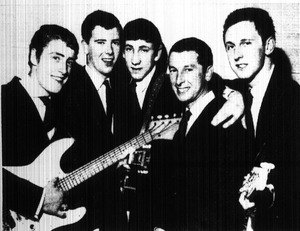 Ian 'Mac' MacLagan (Small Faces) : I saw them, before Keith was with them. And Townshend was using tremelo... he hadn't got into feedback, and he was just dynamic. I loved Hendrix, but I always thought Townshend was first. He was much harder and meaner and nastier. Just tough.

Pete Townshend : Roger was really the balls of the band, and ran things the way he wanted. If you argued with him you usually got a bunch of fives. It was good in a way because every band needs someone in that strong, pushy role.

Roger Daltrey : When the group started, I was a shit singer. They didn't need a singer in those days anyway. They needed somebody who could fight, and that was me.

Carl Leighton-Pope (mod scenester) : We used to go to the Oldfield Tavern in 1962-63, which was a pub in Greenford and The Who would play there on a Thursday night, so we would go there because they were mods, so they were our band. That was an important meeting place for us.

As a mod in the 60s, clothes and music defined my life. That and our friends, our parties, youth clubs, clubs, everywhere you went it was all about what kind of music you liked, and therefore how you looked, who you were. I used to drive my Vespa to school, spent a lot of money on clothes.

I was in a little gang of about eight or ten guys, all about the same age, getting into a little bit of trouble, having a good time, but it was all about music.
(Source : interview with Johnny Black, for Audience magazine, January 2013)
Tweet this Fact