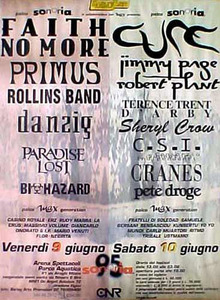 Claudio Trotta (promoter) : My first Sonoria Festival had been a flop, but this one worked better. I made this one two days instead of three, and two stages. I increased the number of acts playing, and I made it more coherent musically. The headliners were The Cure and Robert Plant and Jimmy Page, and it drew 25,000 people. But it was nearly a disaster again, because on the day of the second day we had ten hours non-stop of heavy rain. Everything was muddy, the stage was flooded, and I was looking round for a tree where I could hang myself.
(Source : interview with Johnny Black, Audience magazine, February 2019)
Tweet this Fact