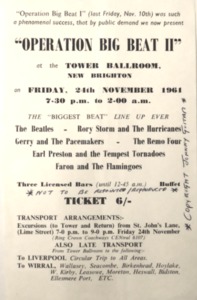 Operation Big Beat II, headlined by The Beatles, is staged at The Tower Ballroom , New Brighton, Wallasey, England, UK, Europe. Other featured acts include Emile Ford, Rory Storm And The Hurricanes and Davy Jones. [Earlier in the day, The Beatles have also played at The Casbah Club in Liverpool.]

Sam Leach (promoter, Operation Big Beat) : John Lennon told me he loved playing New Brighton. This night was the Beatles record UK attendance – 4,600 fans made it a night to remember. That is where Beatlemania really began.

I was looking for new bands to appear at the Cassanova Club which I'd just opened in Liverpool's city centre.

I’d heard about a new group called The Beatles, who had just returned from Hamburg.

It was a dirty, rough, place. A drunken lad bumped into me and asked ‘Do you want a fight, la?’ I said, 'No mate, I think the fighting’s over there.' And it was ... when you looked round there were fights breaking out all over the place.

I was about to leave when the sound of the William Tell Overture blasted out.

Wondering why classical music was being wasted on this lot, I hesitated and turned towards the puny little stage. Bob Wooler's immaculate voice announced excitedly, 'It's The Beatles'.

Within seconds I was hooked. The five black leather-clad figures had an energy like nothing I’d ever seen.

After the show finished, I followed them into their dressing room – a ladies toilet converted for the night. Excitedly waving my bookings diary, I told John and Paul, 'One day lads, you're going to be as big as Elvis.' That quote is credited to a lot of people, but if you ask Paul, he’ll tell you I was the first to say it.

I gave them 12 bookings there and then.
(Source : http://www.liverpoolecho.co.uk/whats-on/music/preview-operation-big-beat-ii-3360945)
Tweet this Fact