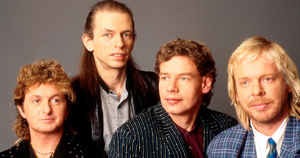 Vic Johansen (audience) : The local radio station relayed a request from the band that they wanted everyone planning to attend the evening's concert to please wear white clothing. The plan was to have a white background for the planned video recording of Order of the Universe. The song was played twice that show; once for the video filming which, as I recall, had several breaks for editing purposes. I am reasonably certain that the recording of the video took place before the intermission period, right after And You and I. Later, the band played the song in its entirety.