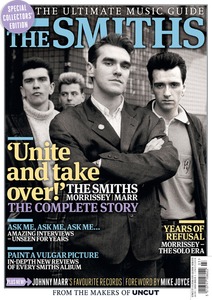 When The Smiths play at Pier 84, New York City, USA, Mick Jagger of The Rolling Stones attends the gig with Anita Pallenberg.

Richard Nemeth (audience) : I was 22 years old at the time and attending college at Rutgers University. I lived in East Brunswick, New Jersey, a suburb of New York City, about 40 miles southwest of Manhattan. I went to the show with four friends, all fervent Smiths fans. We took the New Jersey Transit train from New Brunswick, New Jersey to Penn Station, New York and walked to the concert site from there.

At the time, I was deeply engrossed in the music scene. While I loved many bands and artists, such as The Cure, New Order, Peter Murphy, Love And Rockets and Siouxsie And the Banshees, the Smiths were my absolute favorite. I will even admit to cultivating a “Morrissey look” at the time. I also had a feeling that Smiths concert tours in the U.S. would be few and far between, so I made sure I attended this show.

There was an incredible adulation of the Smiths in the U.S. at this time, but not on a huge scale. Most of the fans were like myself, college age and more of an “alternative music” type. We all loved British bands and disliked musicians like Bruce Springsteen (who was huge at the time) and his type of fans. The Smiths’ music was played mostly on college radio stations and the very few commercial alternative music stations. My best friend was a DJ at WRSU-FM, the Rutgers radio station, and I helped him program his show on a fairly regular basis. The Smiths always had a place on the playlist.

The Smiths concert on the Pier in New York was on a cloudy, humid day – August 8, 1986. I was with a group of friends, mostly college age, walking to the Hudson River location of the concert. Streaming west with us was a huge group of fans, anxiously awaiting the appearance of what I believe we all thought was the best band that ever existed. I remember the other fans as being an eclectic mix of gothic, artsy college students, younger people of a high school age, looking a bit intimidated and confused, and most curious of all, a fair share of frat boy types.

Since we were all very energized to see the Smiths, it was frustrating for many people to sit through the opening act – Phranc. Phranc came on stage and immediately described herself as, “just your average American, Jewish lesbian” and began singing songs about oppression, racism and other socially conscious issues. Towards the end of her act, many in the audience yelled in unison, “Fuck you!” in response to her asking everyone to join her in a song against, of all things, female mud wrestling. I was a bit surprised at the intensity of the crowd’s rancor, considering most Smiths fans I knew were fairly compassionate themselves.

When the band finally took to the stage, it took many people by surprise, as it was fairly quick after the exit of the opening act. The first chords of “How Soon Is Now?” began and Morrissey immediately appeared, gesturing and dancing in his endearingly awkward, ‘trademark’ way. The crowd went absolutely wild, screaming and applauding so loud, it was hard not to get caught up in the incredible adulation towards the band. Looking back, I expect the band would have commenced the show with a track from their new album, “The Queen Is Dead”, but opening up with their signature song was a genius move, immediately provoking an incredibly emotional outpouring from the audience. The evening continued to be an incredible musical event – classic Smiths scenes, such as young men and women rushing the stage to present Morrissey with flowers and hug him, only to be quickly escorted off-stage by security, occurred a few times during the show. Morrissey rarely addressed the audience, but periodically did, offering only quick introductions to certain songs. The band performed almost every song from “The Queen Is Dead” (for some reason, the song “Cemetary Gates” sticks in my mind as being incredibly well done). After the show, I listened to that album every day for months, even on my Walkman during classes at school.

I look back on that night (almost eighteen years ago!) with incredible fondness, as I am still a big fan of the Smiths and Morrissey. Having recently finished the novel, “How Soon Is Never?”, I have found myself listening to classic Smiths songs almost daily on my I-Pod.

Mike Joyce (drummer, The Smiths) : Mick Jagger turned up. He was at the side of the stage, bopping away with Anita Pallenberg.
Tweet this Fact