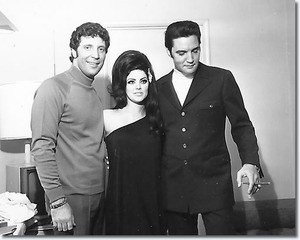 While Tom Jones is playing during a month of live dates at The Flamingo Hotel, Las Vegas, Nevada, USA, he is visited by Elvis Presley.

Tom Jones : He [Elvis Presley] saw me at the Flamingo in 68. He said he wanted to make a comeback, live, because he hadn't sung live for years. He wanted to sing in Las Vegas, so he felt that I was the closest thing to him. My stage presence, he felt, was similar to his. He said that I gave him confidence to make a comeback, because the single performer was gone now that The Beatles were so successful.
(Source : not known)


Luckily, I didn't know in advance which show he would he attending; otherwise I'm sure I would've been terrified. Afterwards, he carne backstage and said I'd given him the confidence to perform live again. He told me, 'Everything's changed so much. Groups are big now, with The Beatles being so successful, and I was afraid that the day of the solo performer was over. Also, I didn't want to put on a show that would seem old-fashioned, but you've shown me that there's still a big demand for the sort of thing I do'.
(Source : not known)

Bill Parkinson (guitarist, Tom Jones) : Elvis Presley came to the show with his new wife Priscilla. He was also accompanied by his buddies the Memphis Mafia. He sat in the front row, probably only 10 feet away from me. As we played through the show, I could see that he was turned on by the music which we played with great passion. Elvis was on the edge of his seat throughout the show until we reached the climax of the show with a number called (Land of a Thousand Dances, a Wilson Picket number). The whole thing starts with a groovy drum and guitar riff. As I looked out to the audience, Elvis was out of his seat and the whole thing went along like a train. We were high on adrenaline and gave it our all. When it came to my guitar solo, Tom would dance towards me and me towards him, playing my heart out. I then did something that I had never done before. I turned towards Elvis and turned my guitar towards him. He responded my jumping up and clapping, he was well into it.

Afterwards, 'The Three Squires', Vernon Mills, Chris Slade, and myself went into Tom's Dressing room to meet Elvis. Earlier Chris Ellis the roady, got us some special photo's of Elvis and Priscilla's wedding. Elvis asked me where we had we got them from and I told him that the roady had got them for us. Elvis then congratulated me on my performance and signed the photograph. A couple of his Memphis Mafia friends asked me what I was doing after the tour as Elvis was interested in me and would be starting a live show in the near future. At that point in time Tom was a bigger draw, so I decided to stay put. What a fool! Even if I had played rhythm guitar for Elvis it would have been a great privilege. This has since been a great regret in my life.
(Source : interview in NME, April 1968
Tweet this Fact