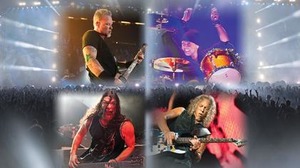 On their WorldWired tour, Metallica play the first of three nights at The Royal Arena, Copenhagen, Denmark, Europe, supported by Hatesphere. This show marks the opening of The Royal Arena.

Dan Braun (show director, Metallica) : James Hetfield has been interested in drones for a while. Of course, part of my job is risk management and I was never really interested in having these high flown, 4-propeller drone things with cameras on the bottom and flying them over crowds. I was very averse to having someone piloting a drone over a crowd where the chance for injury was too high for me to consider acceptable. Because James has been interested in trying to use drone technology for a while, we decided this tour would be a good time to investigate it further.

So, I consulted with Adam (Adam Davis of TAIT) about the drone concept because I know he is always on the cutting edge of technology. Adam suggested doing a drone swarm and we decided it should be done during the song ‘Moth into Flame.’ With this type of visual effect, the song would have the opportunity to really invent itself. It was the marriage of drone technology combined with an artistic vision of a visual effect that we wanted to create.

It was the only way we could create the visual drone element; so, Adam introduced us to one of TAIT’s live event partners, a drone company called Verity Studios, and, in typical Metallica fashion, we dove into the deep end.

The first night that we successfully did the drones in Copenhagen (which when you do something like this there is a lot of holding your breath when you try to do it live because we have all seen Spinal Tap and we have all heard the horror stories about Spinal Tap opening nights and we certainly had more than a few elements that could have done us in like that) and they finished the song ‘Moth into Flame,’ James walked over to a microphone and just said “That was f—ing cool!” And, honestly, I don’t know a better way to describe them. It’s pretty magnificent what they are doing.Whether you see it live or on social media, it’s pretty amazing.

The guys who programmed the drones did a great job. The drone element essentially disappears with the song. With ‘Moth into Flame,’ the little light source is the moth and the band is the flame. But it takes a minute to figure out that analogy and what we’re doing with this effect. It’s pretty cool.
(Source : http://www.taittowers.com/2017/10/06/tait-talks-with-metallicas-show-director-dan-braun/)