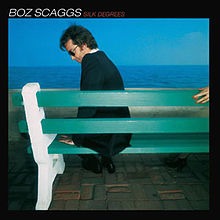 Boz Scaggs' album Silk Degrees debuts on the Billboard album charts in the USA. It will peak at No2, remaining on the chart for 78 weeks, eventually selling over 5m copies.

Boz Scaggs : I met Jeff (drummer Jeff Porcaro) through producer Joe Wissert. I had assembled a body of material and was getting ready to start the Silk Degrees album. Joe had been hearing a good deal about these young musicians - Jeff, David Paich, and David Hungate - who had been playing mostly individually, but had been doing some sessions together. He thought they might be the nucleus of a great section, so we got together on a session to see if it would work. Obviously it did, and they were the section that made the Silk Degrees album with me.

The real surprise and joy of working with those guys was that they shared my enthusiasm for contemporary urban black music. We were trying to do something that not too many others were trying to do - the white boys listening to the other side of the radio. Jeff, David, and David had a feel for that stuff. Low Down was just a natural for them. David Paich and I wrote that one, knowing that there was someone there like Jeff to carry it.

Jeff approached his role more like a songwriter, a singer, or an arranger would approach the song. He did a lot more than just keep time. He actually moved me as a singer through the song. Everybody in the band would know what was coming up in the next few bars, because we could feel it in the way he anticipated, the way he moved us toward it, like a rider moves a horse.

Harbor Lights was a song for which he was greatly responsible for setting the tone. That was a songwriter presenting a song and getting back an interpretation from the musicians that wouldn't have been possible without his unique interpretation. I'd throw it out in the air, and this kindred spirit would collect it and transpose it back to me in a way that would give the song new meaning and new life.

I could say that in general about the way Jeff absorbed things. I think a lot of drummers would say the groove he set up on a song like Lido Shuffle was a classic shuffle. It's a very elusive little time that he plays. It sounds simple, but it's really not easy to execute. A lot of drummers recognize that Jeff had this shuffle that was unique. It's probably the hardest of all the grooves to keep, and Jeff was a master of that. Jo Jo was another very elusive groove. It took a lot of innovation and creativity for a drummer to pull some of those grooves off.

First and foremost was Jeff's energy and enthusiasm. You would gain a sense of confidence as an artist working with someone you would feel was a kindred spirit. Jeff found the heart of what you were trying to do. I know enough about Jeff to know that that was not true of every session he walked into, but if it was something he emotionally tied into - music that touched him- he loved to help interpret it. He made it his own piece. It had his signature on it. He danced a song. He sang a song. He paraded your own song in front of you through his eyes, through his own interpretation.

Jim Keltner (drummer) : It was when I heard Low Down from Boz Scaggs' Silk Degrees album and later Hold The Line by Toto that I realized Jeffrey had become one of the baddest cats on the planet.