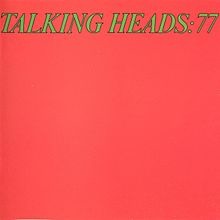 The New York new wave was a markedly different beast from its London offspring, punk rock. English punk focussed heavily on just two elements of the New York scene, notably the musically simplistic energy of The Ramones and the fashion-sense of Richard Hell, then used the former as a musical manifesto and the latter as a style template.

Meanwhile, back in the Big Apple, bands falling under the new wave umbrella were about as musically diverse as it was possible to be, sharing little other than their emergence in the same time and place. The romantic Hispanic rock of Mink De Ville bore little resemblance to, for example, the trashy pop ethic of Blondie, and the two bands who formed the vanguard, Television and Talking Heads were both different again.

The Lower East Side art-rock of Talking Heads with its staggered rhythms and sudden tempo changes, seemed a deliberate rejection of earlier rock structures. The guitars were tuned oddly, David Byrne’s singing was self-consciously strained, the lyrics didn’t always rhyme and often sounded like the incoherent babble of asylum inmates.

Byrne has explained his oblique approach to the lyric of the album’s signature song, Psycho Killer, by saying that he intended it, “to be like Randy Newman doing Alice Cooper. One way of telling the story would be to describe everything that happens - ‘He walks across the room, he takes so many steps, he’s wearing such-and-such.’ That tells you everything that’s going on, on one level, but it really doesn’t involve you emotionally. The other extreme is to describe everything as a series of sensations. I think that sometimes has more power, and affects people a little stronger.”

Television, on the other hand, wrote punchy, concise lyrics that sounded as if they might have come from a Mike Hammer pulp detective novel, and conjured up dark, sinister atmospheres through the interplay of the guitars of Richard Lloyd and Tom Verlaine. By all accounts their early gigs were appallingly bad, but they persevered. “Television rehearsed for six to seven days a week for four to six hours a day,” says Lloyd. “We were both really roughshod musicians on one hand, and desperadoes on the other, with the will to become good.”

By the time of Marquee Moon, their rhythms were tight and choppy and their coruscating, mercurial lead lines frequently recalled the heyday of San Francisco acid rock, as did the extended lengths of their improvisations.

Producer Andy Johns, who’d previously done Goats Head Soup for the Rolling Stones, remembers Television as a hard band to fathom. “My first impression was that they couldn’t play and couldn’t sing and the music was very bizarre. But after we finished mixing, we went to some rehearsal place and played it on these large speakers, and I was bowled over.”

It was Talking Heads, however, who proved themselves able to change and adapt with the times, becoming one of the most successful bands of the 80s, while Television, who initially looked a much safer bet for long-term mega-stardom, rapidly crashed and burned amid serious ego-clashes.