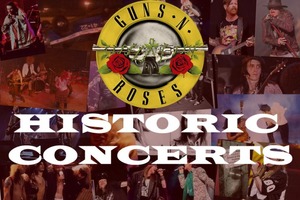 During the second of two nights at The Erwin-Nutter Center, Dayton, Ohio, USA, Guns N'Roses frontman Axl Rose gashes his hand open to the bone on a broken microphone stand.

Axl Rose : We [Slash and Axl] had a run-in in Dayton, because both myself and Dougie thought he said something shitty to me onstage. That was the night I cut my hand to the bone. Backstage we have monitors much like the ones onstage, and while I was back there dealing with my hand, I thought I heard him take a potshot at me. I wrapped my hand up in a towel and was like, "Let's get it taken care of, so I can finish the show." I came back onstage and was a dick to him and told him I'd kick his f**king ass in front of 20,000 people. That was f**ked up. I was wrong, and I apologized the second I realized I was mistaken. Someone who is supporting me as strongly as he does is a hand I never want to bite.
(Source : Interview with Del James of RIP magazine, October 1992)
Tweet this Fact