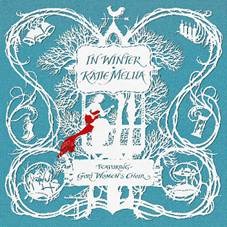 Katie Melua releases a new album, In Winter, featuring The Gori Women's Choir, on BMG Records in the UK.

Katie Melua : I was mesmerised by their (The Gori Women's Choir) tone and sonic richness. They are essentially a vocal orchestra,” says Katie. With a vision to create a winter-themed record, one that was centred around the Georgian choir’s unique polyphonic sound, Katie enlisted world-renowned choral composer Bob Chilcott to arrange the vocal parts. “I learnt the importance of restraint and space from Bob. There was simply no one else I could think of who would be more perfectly suited to this particular challenge.

I’ve been asked a fair few times now why I chose to write around the theme of winter for this album, and, truthfully, the idea came from a conversation I was having with a friend of mine a few winters’ ago. We were both lamenting the fact that there didn’t seem to be a go-to album out there for us to listen to during the winter months – an album that would fill the house with wonderful, warm, poignant sounds rather than the usual jingle-bells pop songs that tend to hit the airwaves during that time of year. Something we could listen to from start-to-finish rather than on a song-by-song basis. So, that’s how the album was born – out of necessity!

There were many unknowns: we weren’t established producers; we were building a studio; the choir had never recorded with headphones; Cecil (engineer Adam 'Cecil' Bartlett) didn’t speak a word of Georgian and could I effectively communicate to the choir how I wanted this record to sound?

I feel the stillness of the winter season really causes us to reflect on our lives and relationships, wondering if our loved ones share the same feelings when it comes to growth and the fear of change.
(Source : press release with album)
Tweet this Fact