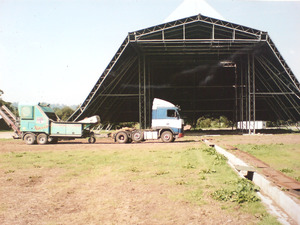 The Pyramid Stage at Glastonbury festival site in Pilton, Somerset, England, UK, Europe, burns down in the night, with just days to go before the festival is due to start.

Bill Egan (Applications engineer, Aggreko) : I remember waking up at 4am to see the original pyramid stage ablaze, with flames reaching 100 feet into the air just a few yards from our cabins.

Michael Eavis (spirit of Glasto) : I was woken at four a.m. on 13 June, and the pyramid stage was just a huge fireball. Site workers had discovered the blaze and, by the time I got onto the site, the flames were jumping fifty feet in the air. My little daughter Emily cried her eyes out. The police said it was probably arson, but I’ve no reason to believe that.

All the bands were booked, and the tickets were sold out but luckily, adversity seems to bring out the best in me and I immediately became determined that the festival would go ahead. By five-thirty, I’d woken up Steven Corfield of Serious Stages, which is based in the village, and we’d started planning to build a temporary stage. The fire brigade couldn’t put the fire out quickly enough, so we resorted to bulldozing it out of the way which allowed work to start on the new stage while the pyramid was still blazing.
(Source : interview with Johnny Black, for Audience magazine)
Tweet this Fact