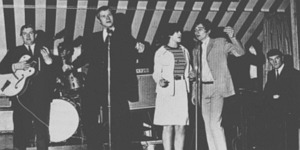 Micky Waller (drummer, The Brian Auger Trinity) : We were managed by R'n'B mogul Giorgio Gomelsky. Gomelsky and Auger were hatching plans with Long John Baldry to launch Steam Packet, an R'n'B supergroup.  It was John who wanted to bring in Rod and in turn, Brian Auger suggested a third singer, Julie Driscoll.

I remembered Rod from the Hoochie Coochie Men where he wore a blazer and striped trousers, which contrasted with the R'n'B crowd, most of whom dressed like slobs.
(Source : not known)
Tweet this Fact