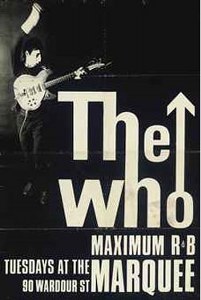 The Who begin a residency at The Marquee Club, London, England, UK, Europe, which will establish the group as one of the most exciting bands in London.

Harold Pendelton (owner, The Marquee Club) : The weakest night of the week was Tuesdays and this group who were nothing had two amazingly astute managers called Kit Lambert and Chris Stamp who I thought were coming boys. I thought, 'These two are very, very bright'. And they were desperate to get in The Marquee so I gave them the worst night, the Tuesday night, that was the night all the pub managers took off, it was the night the West End was dead. These two were unbelievable. They were the originators of promotions and stunts and spin and they worked at it and they built that night up, they built The Who up, and The Who built a following which was unbelievable.
(Source : interview with Johnny Black)

'Irish' Jack Lyons (mod, Who fan) : I found out that The Who had managed to get themselves booked into a series of Tuesday nights at The Marquee Club in Wardour Street. Most of the crowd in the Goldhawk Club were saying things like, "What, The Marquee? It's no-man's-land. It's CND (Campaign for Nuclear Disarmament) and beatniks." They were right.

I mean, this place The Marquee; Manfred Mann played there, very organic jazz. Dizzy Gillespie; brilliant stuff but not exactly New Wave R and B, if you know what I mean. If you wanted John Lee Hooker-style R and B you went to the 100 Club in Oxford Street. The Flamingo; Long John Baldry and the Hoochie-Coochie Men, Rod 'the Mod' Stewart was playing with them. Yeah, R and B could be heard at a lot of clubs - but NOT The Who's kind of New Wave R and B like James Brown, Martha And The Vandellas, at The Marquee.

It wasn't even a nightclub. It was very strictly run by the National Jazz Federation and never went on after eleven o'clock every night. So we were not exactly over the moon when we heard that The Who was starting off a Tuesday night residency in this place. I mean, TUESDAY NIGHT, for God's sake!
(Source : not known)

Roger Daltrey (vocalist, The Who) : We played there every Tuesday night. When we first did the job, Tuesday was a slow night. That's why they let us in there. God, they didn't know what hit them. We were just a pub band. We were big in our own little area. But the great thing about The Marquee was that the West End of London, it was like the whole of England goes out from the West End of London, UK. So it expanded our audience potential by literally a million. And that in itself was very useful. I have to tell you, and I don't mean this as sour grapes or anything, but it is hard to play for fans who see you all the time; makes it much harder.
(Source : not known)

'Irish' Jack Lyons : I've got this distinct memory of meeting up with my two friends Martin and Lee Gaish (who were brothers) for the first Tuesday night. We met at Hammersmith Tube Station and it was absolutely pissing out of the heavens. We were soaked to the skin even at the station and we looked at each other as much as to say 'Shall we bother?'. Then Martin said, "We've gotta go. We've promised Kit." And that was that. We just couldn't let the poor sod down. There was about twenty seven people in The Marquee that night and I'll never forget it. When we first arrived at The Marquee it was absolutely deserted, and Kit Lambert was standing by the admission desk with the club manager John Gee. A bored bouncer stood by the entrance to the floor.
(Source : not known)

Harold Pendleton (owner, The Marquee] : It was in The Marquee that they developed their instrument-smashing antics. Roger would hit his tambourine so hard on the microphone stand that it would splinter, and he'd throw the pieces out to the crowd. Everybody loved this, so gradually they made it a regular part of the act, and it expanded into smashing drums, guitars, everything.
(Source : interview with Johnny Black)

John Entwistle (bassist, The Who) : We were earning nothing, and owed a fortune in smashed guitars and ruined equipment. We started smashing up our gear so we didn't have to do encores. The habit stuck. We were never sentimental about our instruments - just as well. At one point Pete was paying in instalments for six Rickenbackers which no longer existed.
(Source : interview with Lesley Ann Jones)
Tweet this Fact