Random selection from around 4,500 Facts
Click to filter results

.. Older ..
Linda Eastman is born in Scarsdale, New York State, USA. She will be thrust into the spotlight of worldwide fame by marrying a member of The Beatles, and thus becoming Linda McCartney.
PermaLink
In Liverpool, UK, guitarist John Lennon's college friend Stu Sutcliffe joins The Silver Beetles [later to become The Beatles] on bass.
PermaLink
The Beatles play the tenth night of a lengthy residency at The Kaiserkeller, Hamburg, Germany, Europe.
PermaLink
Peter Eckhorn, owner of Hamburg's Top Ten Club, signs a deal with The Beatles for them to play a month of dates, starting the following April.
PermaLink

The Beatles' manager Brian Epstein writes to George Harrison's older sister Louise Harrison Caldwell asking for her help in promoting the band in the USA. He writes, "I will really be more than grateful for anything that you can do with the records, because we really are very anxious indeed that their records will eventually 'break' in the States." He encloses copies of The Beatles' first British album, Please Please Me, and single, From Me to You.
PermaLink
The Beatles are in Studio One, Didsbury Studio Centre, Manchester, England, UK, Europe, recording an appearance on the ABC-tv show Big Night Out, hosted by comedy duo Mike And Bernie Winters.
PermaLink
◄ ►
Brian Epstein, manager of The Beatles, receives an invitation for the band to appear on the prestigious Royal Variety Performance later in the year.
PermaLink
I'll Keep You Satisfied by Billy J. Kramer And The Dakotas enters the UK pop singles chart where it will peak at No4. The song is written by Paul McCartney and John Lennon of The Beatles.
PermaLink
The Beatles continue their three week series of concerts at L'Olympia, Paris, France.
PermaLink
The Beatles issue their latest single, Can't Buy Me Love, in the USA, with advance orders of 2.1m copies.
PermaLink
George Harrison and Ringo Starr of The Beatles attend a party at The Pickwick Club, London, UK, to celebrate the return home from the USA of singer Anthony Newley.
PermaLink
Peter And Gordon release a new single in the UK, Nobody I Know, written by John Lennon and Paul McCartney of The Beatles.
PermaLink
Read More
George Harrison and Ringo Starr of The Beatles record appearances for UK tv show Juke Box Jury at Television Centre, London, UK.
PermaLink
The Beatles play at The Coliseum, Seattle, Washington, USA, supported by Jackie De Shannon and The Exciters.
PermaLink
Read More 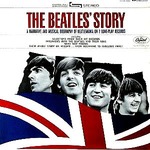 The Beatles Story, a documentary-style double album featuring interviews, press conferences and more by The Beatles, enters the Billboard albums chart in the USA. It will peak at No7 on the chart.
PermaLink
Another Beatles Christmas Show continues its run at Hammersmith Odeon, London, UK, starring The Beatles, with support acts including Freddie And The Dreamers, The Yardbirds, Elkie Brooks, Sounds Incorporated , Mike Cotton Sound and Jimmy Savile as compere.
PermaLink 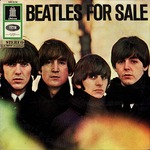 The Beatles new album Beatles For Sale is released in Australia on Parlophone Records.
PermaLink
The Beatles record You've Got To Hide Your Love Away and Tell Me What You See at Abbey Road Studios, London, UK.
PermaLink

The Beatles fly out of The Bahamas, Caribbean, having completed filming for their movie Help!, and return to the UK.
PermaLink

In Obertauern, Austria, Europe, The Beatles continue filming scenes for their second film, Help!, provisionally titled Eight Arms To Hold You On this day they are filmed on a terrace and in the snow.
PermaLink
Ticket To Ride by The Beatles reaches No1 in the pop singles chart, Tio i topp, in Sweden, Europe.
PermaLink 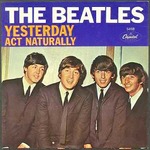 Yesterday is released on Capitol Records in the USA as the new single by The Beatles. In the UK, it remains an album track.
PermaLink

Liverpool singer Cilla Black and Manchester band Wayne Fontana And The Mindbenders, represent Great Britain, and The Everly Brothers represent the USA, at the Grand Gala du Disques in the Congresscentrum, Amsterdam, Holland, Europe. At the same event, The Beatles' manager Brian Epstein collects an Edison Award for their album Beatles For Sale.
PermaLink
Act Naturally and Yesterday by The Beatles tie for the No1 position in the Canadian Pop Singles chart.
PermaLink
When Ravi Shankar plays at The Royal Albert Hall, London, UK, George Harrison of The Beatles is in the audience, and the pair meet up a few days later.
PermaLink
A compilation LP, The Beatles Greatest Hits Volume 2, is released in Australia, Oceania, only.
PermaLink
Hello Goodbye / I Am The Walrus by The Beatles reaches No1 in the Go Set National Top 40 Singles Chart in Australia, Oceania.
PermaLink
◄ ►
The Beatles hit the UK No1 singles slot again with Lady Ma donna. The song is said to have been inspired by the 1955 hit single Bad Penny Blues by British jazz trumpeter Humphrey Lyttelton.
PermaLink
◄ ►
John Lennon and Ringo Starr of The Beatles go to see Gerry Marsden, leader of The Pacemakers, in the musical Charlie Girl at The Adelphi Theatre, London, England, UK, Europe.
PermaLink

Ringo Starr, who had quit The Beatles during a recording session the previous month, now returns to the group.
PermaLink
Read More
Having moved out of Twickenham Film Studios, The Beatles resume recording sessions for their album/documentary film Let It Be in Abbey Road studios, London, England, UK, Europe.
PermaLink
The Beatles make their final public appearance in the form of a live concert on the rooftop at the Savile Row HQ of Apple Records in London, England, UK, Europe.
PermaLink
Read More

Entrepreneur Allen Klein, against the wishes of Paul McCartney, takes over control of The Beatles' financial affairs.
PermaLink
Read More
During their Toronto, Ontario, Canada, Bed-In, John Lennon and Yoko Ono record Give Peace A Chance with vocal assistance from acid guru Timothy Leary, record producer Phil Spector, beat poet Allen Ginsberg and comedian Tommy Smothers.
PermaLink
Read More
Barb Ulviden of Northern Illinois publication, The Northern Star, writes a feature which reports Californian college gossip that Paul McCartney of The Beatles died in a car crash in 1966 and was replaced by a lookalike. This is the second published account of what will become known as the 'Paul Is Dead' myth.
PermaLink
Ringo Starr of The Beatles is recording his vocals for Stardust, to appear on his solo album Sentimental Journey, at Wessex Sound Studios, London, UK.
PermaLink
Bill Wyman of The Rolling Stones attends a party with John Lennon in Los Angeles, California, USA.
PermaLink
Paul McCartney and Wings are recording tracks at Sound Shop Studios, Nashville, Tennessee, USA. During his two weeks of sessions here, McCartney will record Junior's Farm. Sally G, Walking In The Park With Eloise and other material.
PermaLink
Read More
While attending The Midem music industry trade fair in Cannes, France, Europe, George Harrison meets with George Greif, former manager of outrageous satirical comedian Lord Buckley. When Greif mentions that Buckley had lived in a house called Crackerbox Palace in Echo Park, Los Angeles, California, USA, Harrison notes the name down on a cigarette packet and will subsequently write a song, Crackerbox Palace, which will be released as a single. The song mentions meeting George Greif.
PermaLink
Read More
The Girl Is Mine by Paul McCartney and Michael Jackson, peaks at No2 in the Billboard Top 40 Singles chart in the USA.
PermaLink

Guitarist and composer Bill Frisell plays the third of four nights at Yoshi's, Oakland, California, USA. On this night, Frisell plays his interpretations of music by John Lennon.
PermaLink