The Beach Boys play in the The Show of Stars, at Hickam Theatre, Hickam Air Force Base, Honolulu, Hawaii, USA, with Dee Dee Sharp, The Treniers and Jackie De Shannon.
PermaLink

The Beach Boys play at West View Park Danceland, Pittsburgh, Pennsylvania, USA.
PermaLink
The Top Five Singles in the Lever Hit Parade in New Zealand, Oceania, on this day are as follows :
1. BAD TO ME - BILLY J. KRAMER And THE DAKOTAS
2. Hello Mudduh,Hello Fadduh (A Letter From Camp) - Allan Sherman
3. Wipe Out - The Surfaris
4. My Boyfriend's Back - The Angels
5. If I Had A Hammer - Trini Lopez
PermaLink
In My Room by The Beach Boys is the highest new entry in Cash Box magazine's chart of the best-selling singles in the USA, entering at No73.
PermaLink
Read More 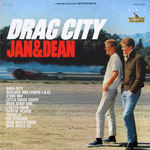 Jan And Dean release a new album, Drag City, in the USA on Liberty Records.
PermaLink

PermaLink
Half of the singles in the newly published Billboard Top Ten Singles Chart in the USA are by British acts. BILLBOARD MAGAZINE - SINGLES CHART - July 4,1964
1. I GET AROUND - THE BEACH BOYS
2. My Boy Lollipop - Millie Small
3. Memphis - Johnny Rivers
4. Don't Let The Sun Catch You Crying - Gerry And The Pacemakers
5. People - Barbara Streisand
6. A World Without Love - Peter And Gordon
7. Chapel Of Love - The Dixie Cups
8. Rag Doll - The Four Seasons
9. Bad To Me - Billy J.Kramer And The Dakotas
10. Can't You See That She's Mine - The Dave Clark Five
PermaLink
The Top Ten records played on KQV Radio, Pittsburgh, Pennsylvania, USA, for the week ended on this date are as follows :
PermaLink
The Penn Theatre in Pittsburgh, Pennsylvania, USA, a much-loved cinema, closes after almost thirty years. It will, however, open again in 1966 as a venue for music concerts by artists as diverse ar Victor Borge, The Beach Boys, Otis Redding, Jefferson Airplane, Tommy James, and Al Hirt.
PermaLink
NBC-tv in the USA premieres a new teen-sitcom called Karen. The theme song, also called Karen, has been written and recorded by The Beach Boys.
PermaLink

The Beach Boys perform I Get Around on the tv series Age Tendre Et Tete De Bois, in Paris, France, Europe.
PermaLink

The day before setting off on a tour of the USA, Brian Wilson of The Beach Boys breakfasts with his new wife, Marilyn Rovell, in Tiny Naylor's Coffee Shop, Los Angeles, California, USA. The pair are trying to overcome the problems that are already besetting their marriage.
PermaLink
Cannibal And The Headhunters, Mike Christian, The Bobby Fuller Four, Jan And Dean, and Jody Miller appear on tv pop show Shivaree, recorded for KABC in Los Angeles, California, USA.
PermaLink 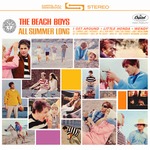 The Beach Boys sixth album, All Summer Long, is awarded a Gold Disc in the USA by the R.I.A.A.
PermaLink
Gary Lewis And The Playboys record Doin' The Flake at RCA Studios, Hollywood, Los Angeles, California, USA. The song is designed as a promotional tune for a Corn Flakes tv advert. The track is arranged by Leon Russell.
PermaLink

It is reported that the average teen-age girl in the USA spends between $8 and $10 per month for rock'n' roll records. Young people buy 80% of all single (45rpm) records and 40% of all albums sold each year.
PermaLink
California Girls by The Beach Boys enters the Billboard Singles Chart in the USA.
PermaLink

In Los Angeles, California, USA, Capitol Records deny the breach of contract allegation of record producer Hite Morgan, who claims that the company has used the Beach Boys song, Surfin' in circumstances other than those in which their original 1962 agreement was made.
PermaLink

The Beach Boys play the second of two nights at The Lagoon, Farmington, near Salt Lake City, Utah, USA.
PermaLink
The Beach Boys add their vocals to the backing tracks for The Little Girl I Once Knew in Western Recorders Studio, Hollywood, Los Angeles, California, USA.
PermaLink

Ronny And The Daytonas, Marijohn Wilkin, Sue York, Diane Jordan and Murv Shiner leave Nashville, Tennessee, USA, to begin a USO-sponsored tour of military bases in France and Germany, scheduled to run until January 3, 1966.
PermaLink
A new teen movie, Wild Wild Winter is released to cinemas in the USA, featuring performances by The Beau Brummels, Jay And The Americans, Dick And Dee Dee, The Astronauts and Jacki And Gayle. The movie is promoted with the tag-line "A Surfin' Snowball".
PermaLink

The Astronauts play the last of three nights at Dave Hull's Hull abaloo, 6230 Sunset, Hollywood, Los Angeles, California, USA.
PermaLink
◄ ►
One day after the new Beach Boys album, Pet Sounds, goes on release in the USA, Paul McCartney and John Lennon of The Beatles attend a private listening party for Pet Sounds held at The Waldorf Hotel, London, England, UK.
PermaLink
◄ ►
Paul McCartney of The Beatles flies from Denver, Colorado, USA, to Los Angeles in a Lear Jet owned by Frank Sinatra. On arrival in LA, he visits the home of John and Michelle Phillips of the Mamas and Papas, where he strums and sings On Top Of Old Smokey with Brian Wilson of The Beach Boys. While in Los Angeles, McCartney is invited to join the advisory board which is planning the Monterey Pop Festival. McCartney's first recommendation is to book the Jimi Hendrix Experience.
PermaLink
The Beach Boys release a new single, Darlin', in the UK on Capitol Records.
PermaLink

Dennis Wilson of The Beach Boys is working on the songs Settle Down and Lady, intended for his first solo album, at Capitol Recording Studio, Hollywood, California, USA.
PermaLink