.. Previous ..
◄ ►
The musical Milk And Honey, with music and lyrics by Jerry Herman, is playing at The Martin Beck Theater on Broadway, New York City, USA, during a run of 543 performances.
PermaLink

The stage musical How To Succeed In Business Without Really Trying, starring Rudy Vallee, is playing at the 46th Street Theater on Broadway, New York City, USA, during a run of 1,417 performances.
PermaLink
Helen Shapiro plays the first night of a week at The Grand Theatre, Leeds, UK. Also on the bill are The Red Price Combo, comedy music trio The Hillsiders and Colin Day. The show is compered by comedian Dave Allen.
PermaLink
Johnnie Lee Wills And His Boys have the second of two sessions during which they record tracks for their Sims Records album Where There's a Wills, There's a Way.
PermaLink
Paul Anka plays the second of seven nights at The Steel Pier, Atlantic City, New Jersey, USA.
PermaLink 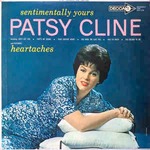 While out to dinner in Los Angeles, California, USA, with his wife and father-in-law, Joe Smith of Warner Bros. Records plays a tape of comedian Allan Sherman's first album, My Son, The Folk Singer, which had been recorded earlier that day. According to Smith, "A guy at the next booth said, 'What is that? I want twenty-five of those. I'll write you a check. We thought we had something."
PermaLink
Johnnie Lee Wills And His Boys have the first of two sessions during which they record tracks for their Sims Records' album Where There's a Wills, There's a Way.
PermaLink
Patsy Cline releases her third studio album, Sentimentally Yours, on Decca Records in the USA.
PermaLink
Ray Charles peaks at No2 in the Billboard Top 40 Singles Chart in the USA with You Don't Know Me.
PermaLink
Elvis Presley's former live-in girlfriend, Anita Wood, reveals in the pages of the Memphis Press-Scimitar that she and he have broken up.
PermaLink
Jazz saxophonist Johnny Hodges begins recording tracks for his album The Eleventh Hour in New York City, USA.
PermaLink
Brenda Lee plays at The Concord Hotel, Lake Kiamesha, New York State, USA.
PermaLink
Bobby Darin continues with four weeks of dates at The Flamingo Hotel, Las Vegas, Nevada, USA.
PermaLink
Roland And The Upsetters play at Molynes Four Roads, Kingston, Jamaica, as part of the Jamaican Independence Night Celebrations to promote street dancing.
PermaLink
.. Next ..